Today’s leading UK campaigning organisation for women’s equality and rights (at home, work and in public life) is known as the Fawcett Society.  Its by-line includes ‘working for women’s rights since 1866’ with very good reason.  For its name and work are inspired by a remarkable woman… 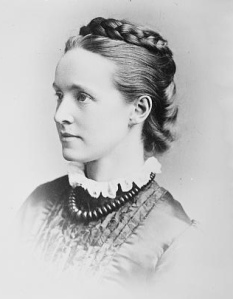 arrett Fawcett (1847-1929) was a woman of many facets: an intellectual, political leader, trade union leader, mother, wife and writer. However, she is primarily known for her work as the leader of the main body of suffragists. The sister of Elizabeth Garrett Anderson, the first qualified female physician and medical pioneer, she was a member of the Langham Place Circle of pioneer feminists.  Indeed, there is as a wonderful apocryphal story about Millicent as young girl, listening in to a conversation between her sister Elizabeth, Emily Davies and Josephine Butler.  They discussed how they needed to divide up tasks within the women’s movement: the first of them would lead women into the medical profession, the second would lead women into education, and the third would give leadership to social welfare campaigns.  All settled, they decided: but who then would secure the vote for women?  ‘It will have to be you, Millicent’, they said in unison, turning to the youngest among them.  Apocryphal or not, the story has much truth about the interconnected strands and leadership of the first-wave women’s movement.

Millicent Garrett Fawcett cast aside her mother’s evangelical religion and was even an agnostic for much of her life, returning to regular worship in the Church of England later on.  Yet the impact of her Christian upbringing was significant, not least the influence of the great broad church theologian and Christian Socialist F.D.Maurice. 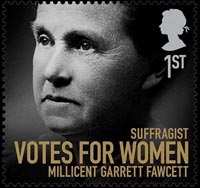 Married to Henry Fawcett, a Liberal MP who was blind, early in her career she grew able at political lobbying and campaigning, serving as Henry’s amanuensis and secretary as well as being his wife.  After the death of her husband in 1884, she became more active in women’s suffrage, and led the faction which favoured non-alignment to any political party.  She successfully helped unite the movement on this basis in 1897 as the National Union of Women’s Suffrage Societies (NUWSS) and became its president in 1907.

Millicent was not initially opposed to the Pankhurst-led WSPU and its militant approach which lifted the movement’s media and political attention to a new level.  When hunger strikes were first staged, for example, she wrote commending the militants’ courage and congratulating them on their release from prison.  As WSPU activity grew more strident and violent however, she was increasingly critical.  For Millicent Garrett Fawcett combined 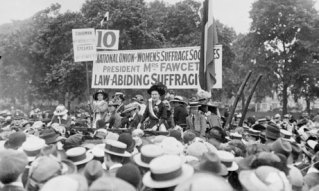 both a profound energy and commitment to women’s causes with political acumen and proportion.  Her leadership of the NUWSS in ‘constitutional’ activities may have benefited from some aspects of more militant campaigning, but its mainstream approach won over many.  A crucial strategic decision, though it lost some members, was taken after the defeat of limited suffrage legislation in 1912.  After this, the NUWSS began to align closely with the rising Labour Party , the only party to support women’s suffrage outright.  This put great pressure on other politicians and added the considerable weight of working class interests to the campaign.  The NUWSS, under Millicent’s leadership, was not wholly distracted by the first world war either.  Although she herself was not a pacifist, to the frustration of some other key leaders and members, she was no ‘recruiting sergeant’ for war like the Pankhursts.  She insisted instead that the NUWSS continue to be active in campaigning for women, whilst showing the value of women in their work during the war.  This was vindicated with the gaining of the vote for 6 million women over 30 on 1918.

Less spectacular than the Pankhursts, and therefore with a much lower profile in subsequent decades, Millicent Garrett Fawcett’s legacy is thus arguably far more profound.  Today she would rejoice at the work of bodies such as the Fawcett Society and encourage all to be involved.

Women still earn only 85p for every £1 a man does, only 1 in 5  of our MPs are women, UK childcare is some of the most expensive in the EU, sexual harassment, rape and domestic violence are still a present and everyday reality for many women, and in the media what women look like is still treated as far more important than our words.

The ongoing gap in pay between women and men

Number of years since the Sex Discrimination Act

All this when the evidence is clear that a healthy economy needs women’s contribution and talent, that our top tables of power make better decisions for us all when women have a greater voice, that a better work/ life balance for parents is not just an investment in their children but in more productive workplaces, that violence against women costs both lives and £40 Billion each year, and that our media and culture are healthier and better populated by real and respected women.

God of patience and persistence,
whose will is to be done in earth and heaven,
We give thanks for Millicent Garrett Fawcett
and for all who worked determinedly for peace and justice.
Grant that we may never lose hope
but always trust in your salvation
through thick and thin.
May your kingdom come among us
now and always, Amen.